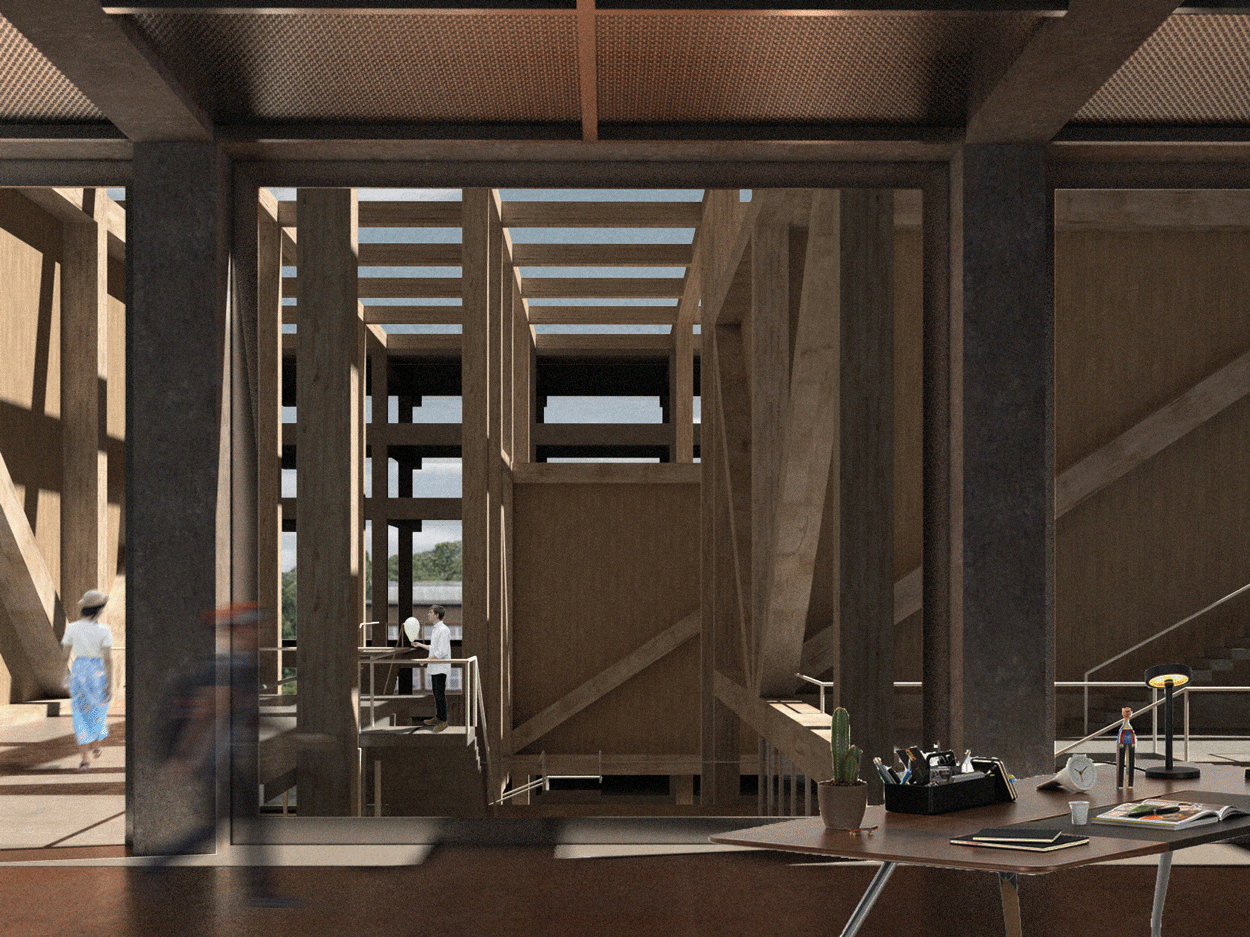 A new centre for the Norwegian Broadcasting Corporation.

In this project of drawing the media house of the future, have I worked in different scales and situations; City / Area / Site / Building, I have looked at how the different scales and situations relate to each other. The project is trying to investigate whether it is possible to create new spatial experiences in the media houses of the future. And the atrium shown in the drawings and models comes as a consequence.

Marienlyst in Oslo has a central placement, but also decentral. It is far from infrastructural stops, and a fragmented and varied urban structure creates a pause in the urban space. Marienlyst is located between slatted buildings, campus buildings and smaller detached houses. I want to place the new media house in an area that does not reduce or extend the distance to infrastructural stops. Or disrupt existing buildings. By placing the building as I do, I make it possible for other alternative buildings in the area. 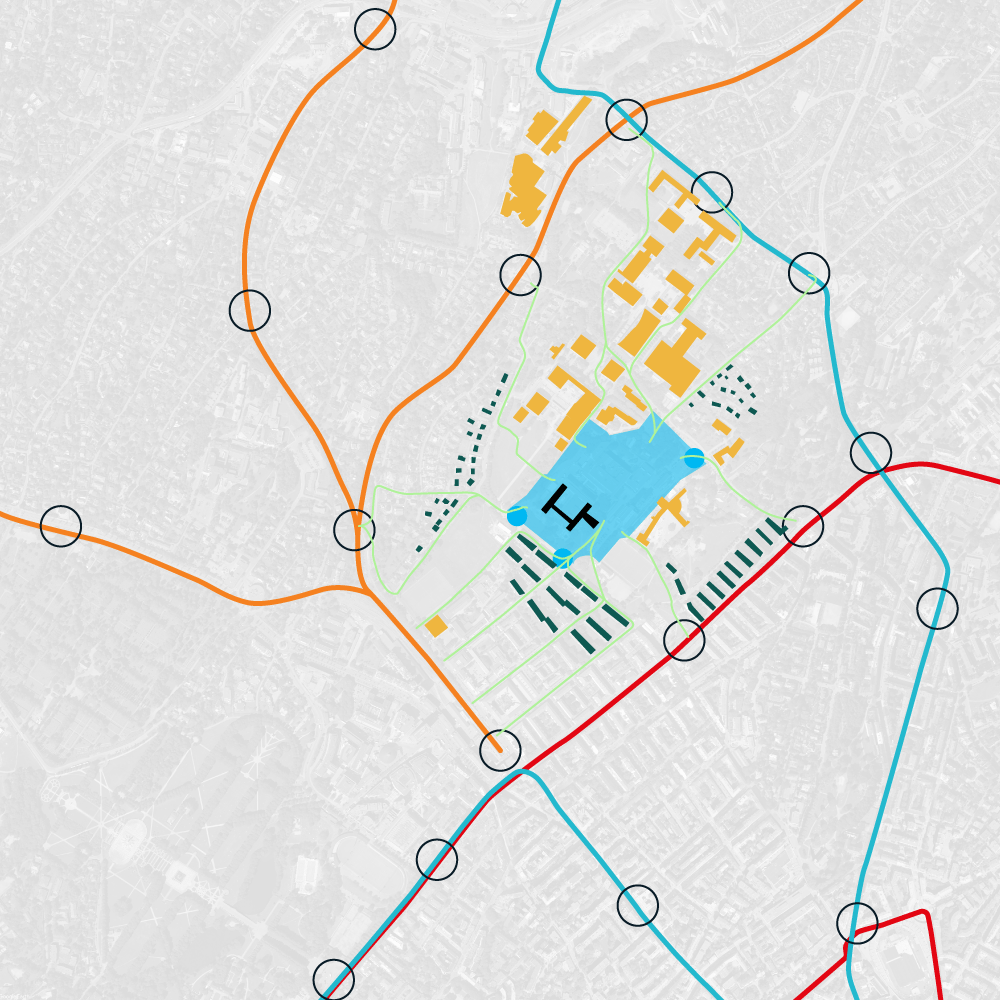 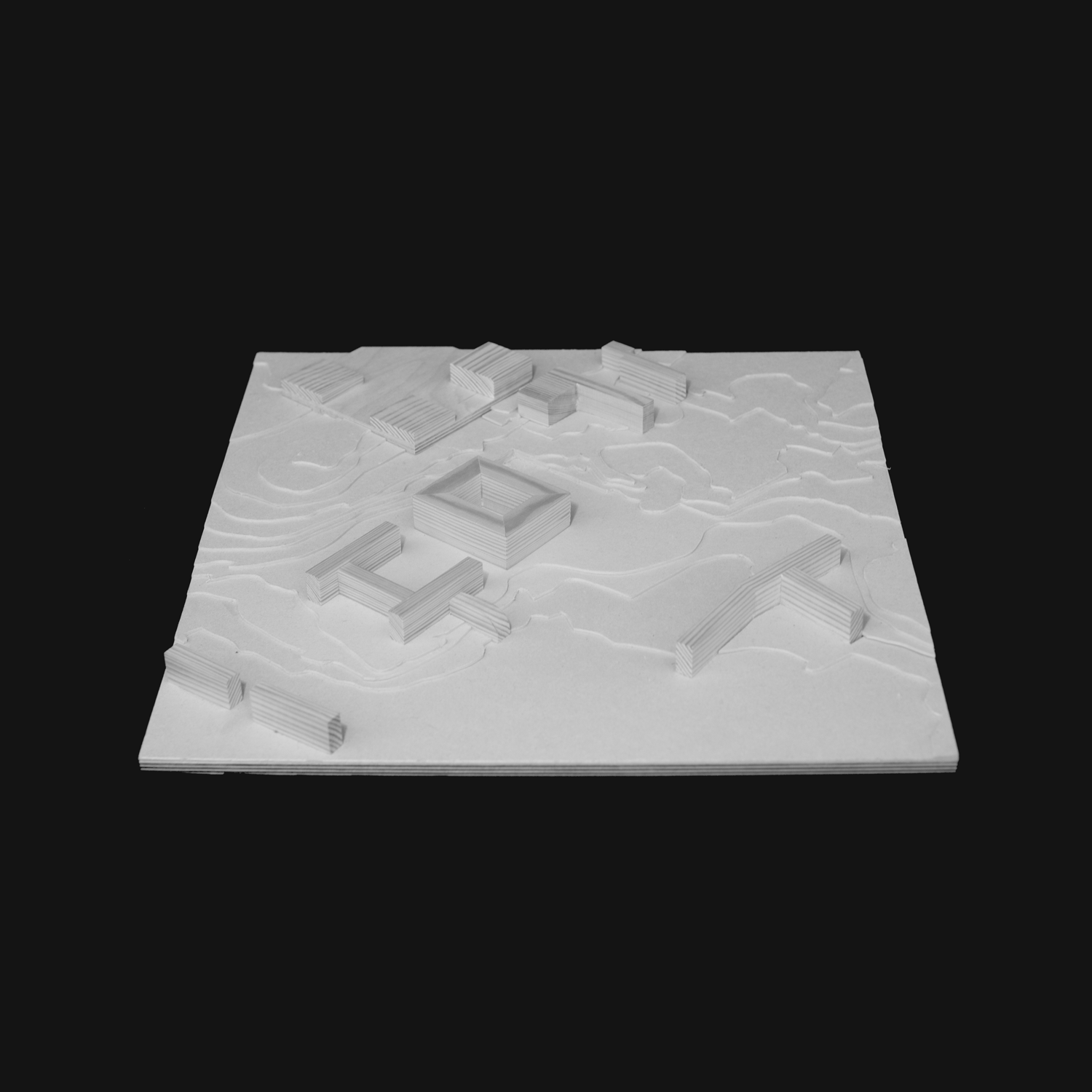 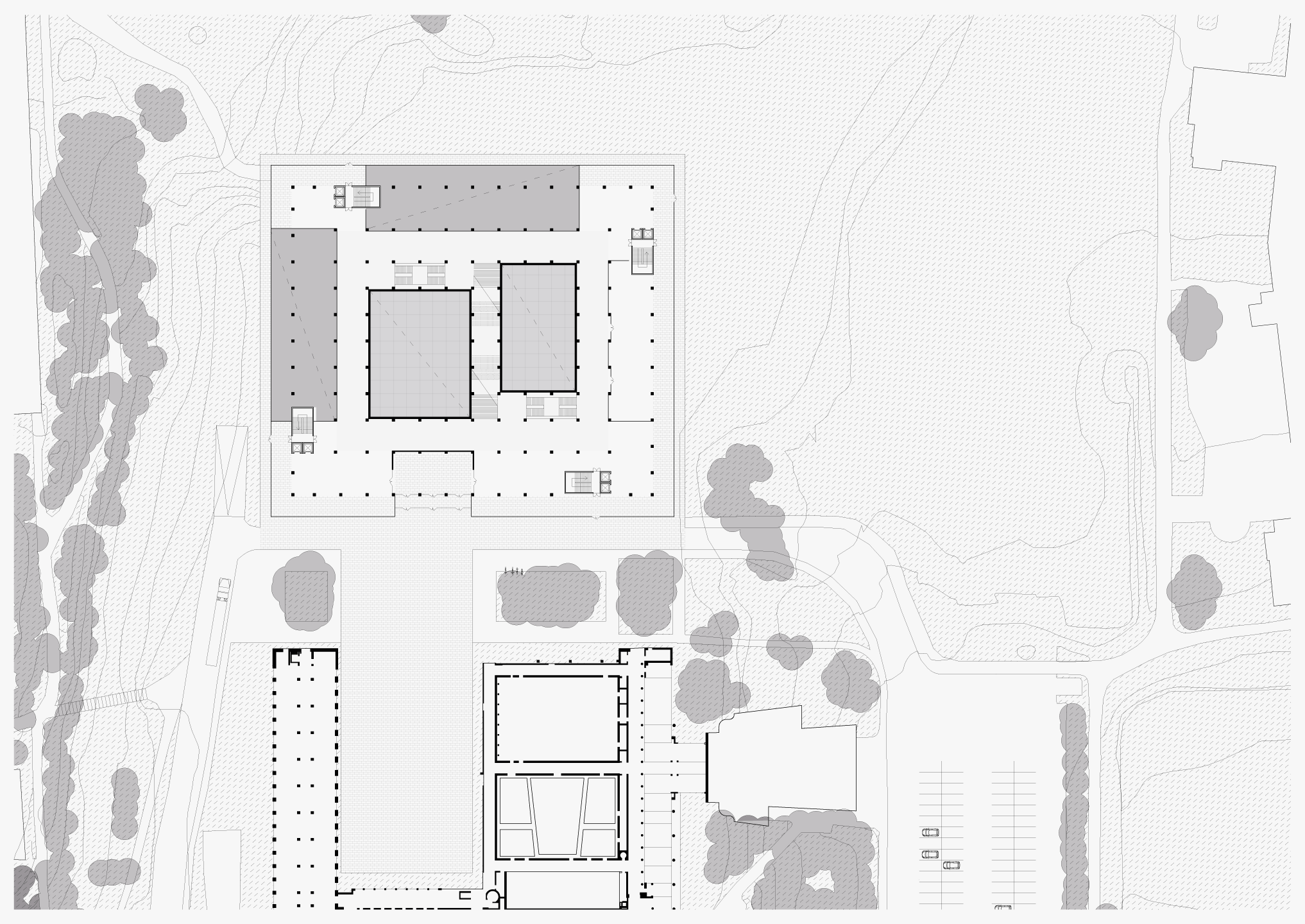 The building is placed in close proximity to the old broadcasting house, and a floor is made, a space between the new and the old. I do this because I think it is a good opportunity for the broadcasting house to be reprogrammed into a film college. Here NRK and students can have closer cooperation. This part of the project I have not gone into in depth, because I wanted to focus on the atrium that you can see in the drawings. The floor between the new and the old will increase the connection between each other, a space that the two buildings share. This floor is also partially pulled into the closed part of the new building. This is done to point out the relationship between the new and the old without connecting to the old. 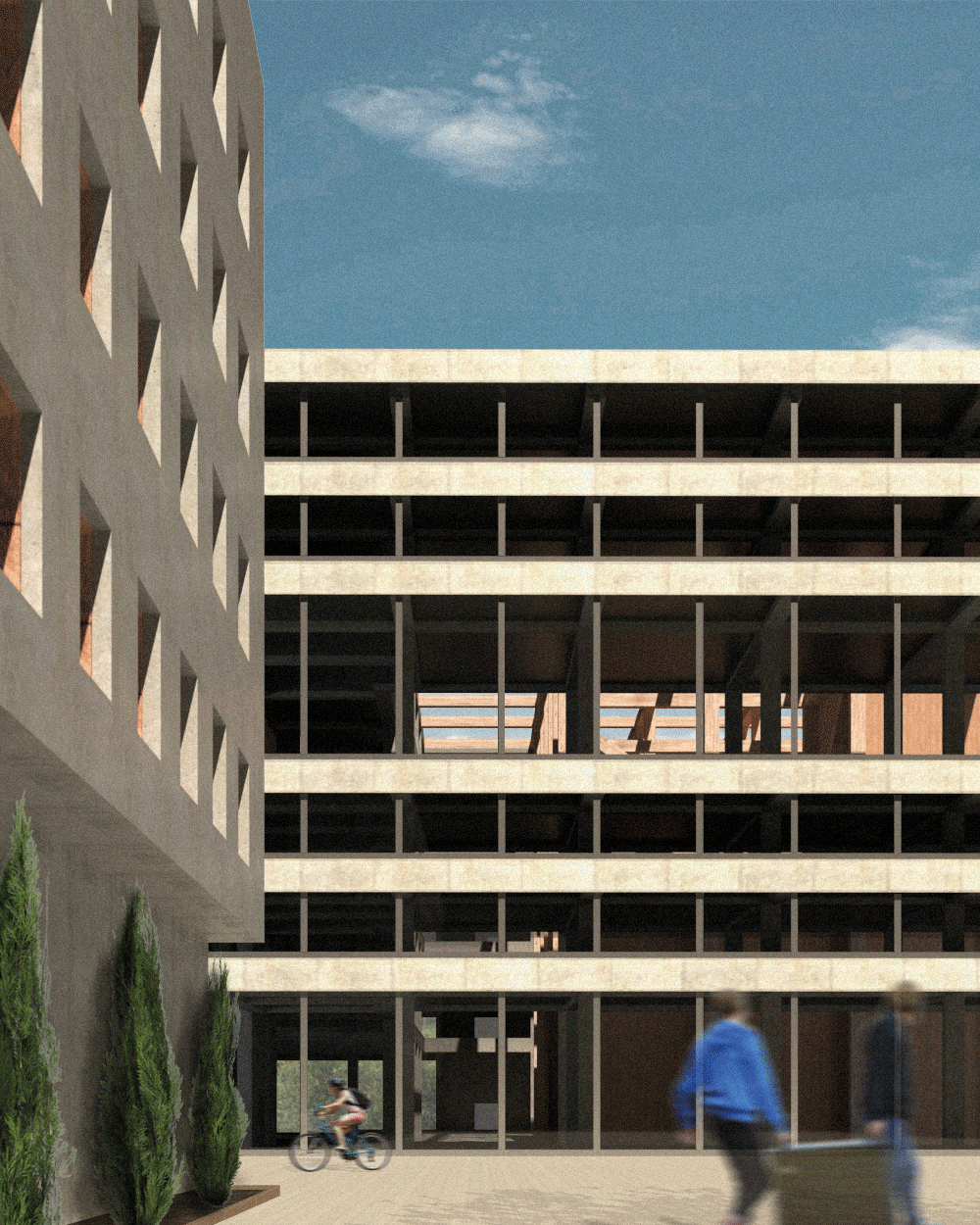 The building’s façade and materiality have taken inspiration from the old broadcasting house. Here horizontal bands of the same type of concrete slabs run around the entire building. This in turn strengthens the relationship between the old and the new, but at the same time separates it from the old. Because unlike the old broadcasting house which has a relatively dense facade, I want to have greater visual contact into the building. From the outside, I want to hint at the production on the inside. Here you get a glimpse of the editors who work, but also a glimpse of the atrium. 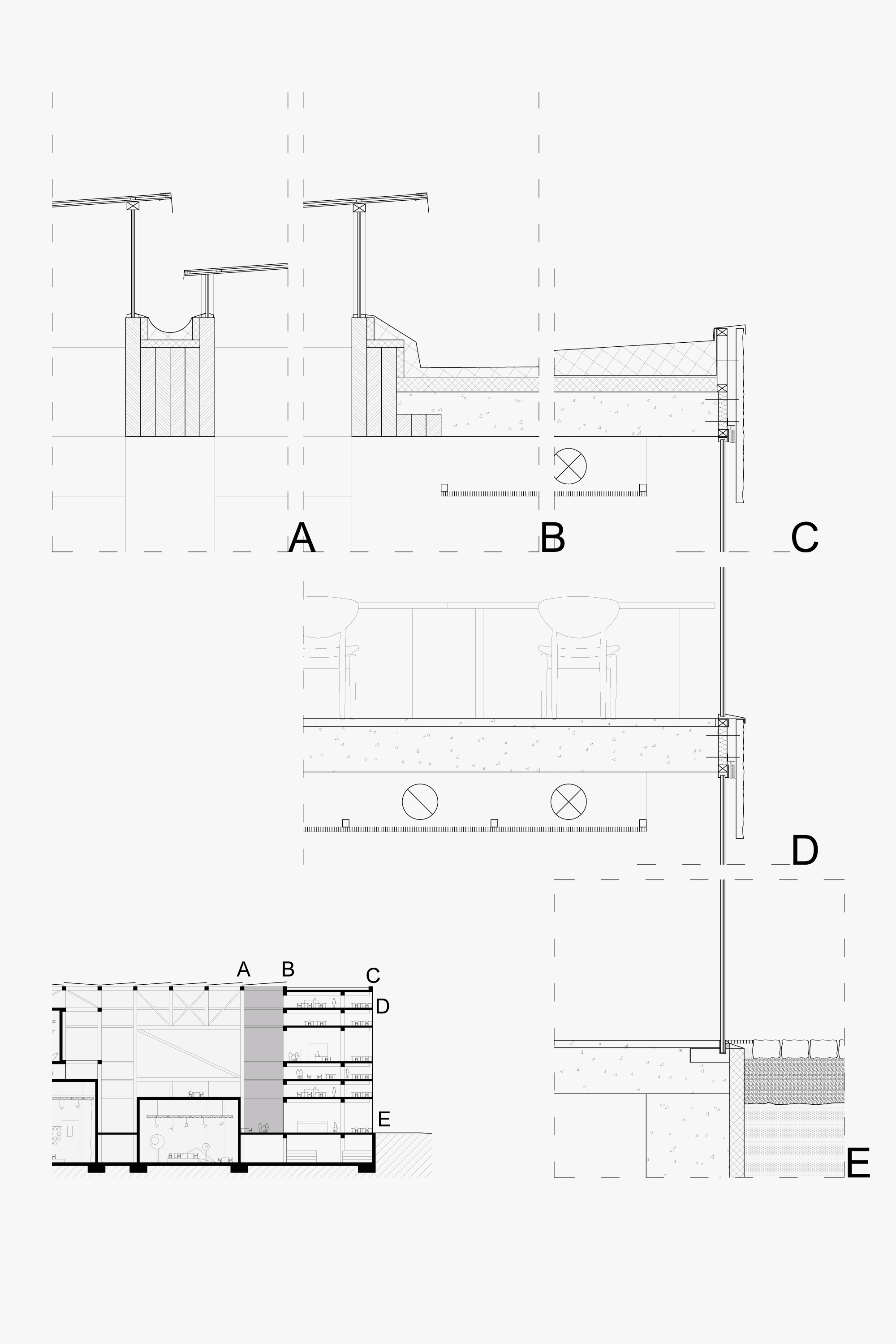 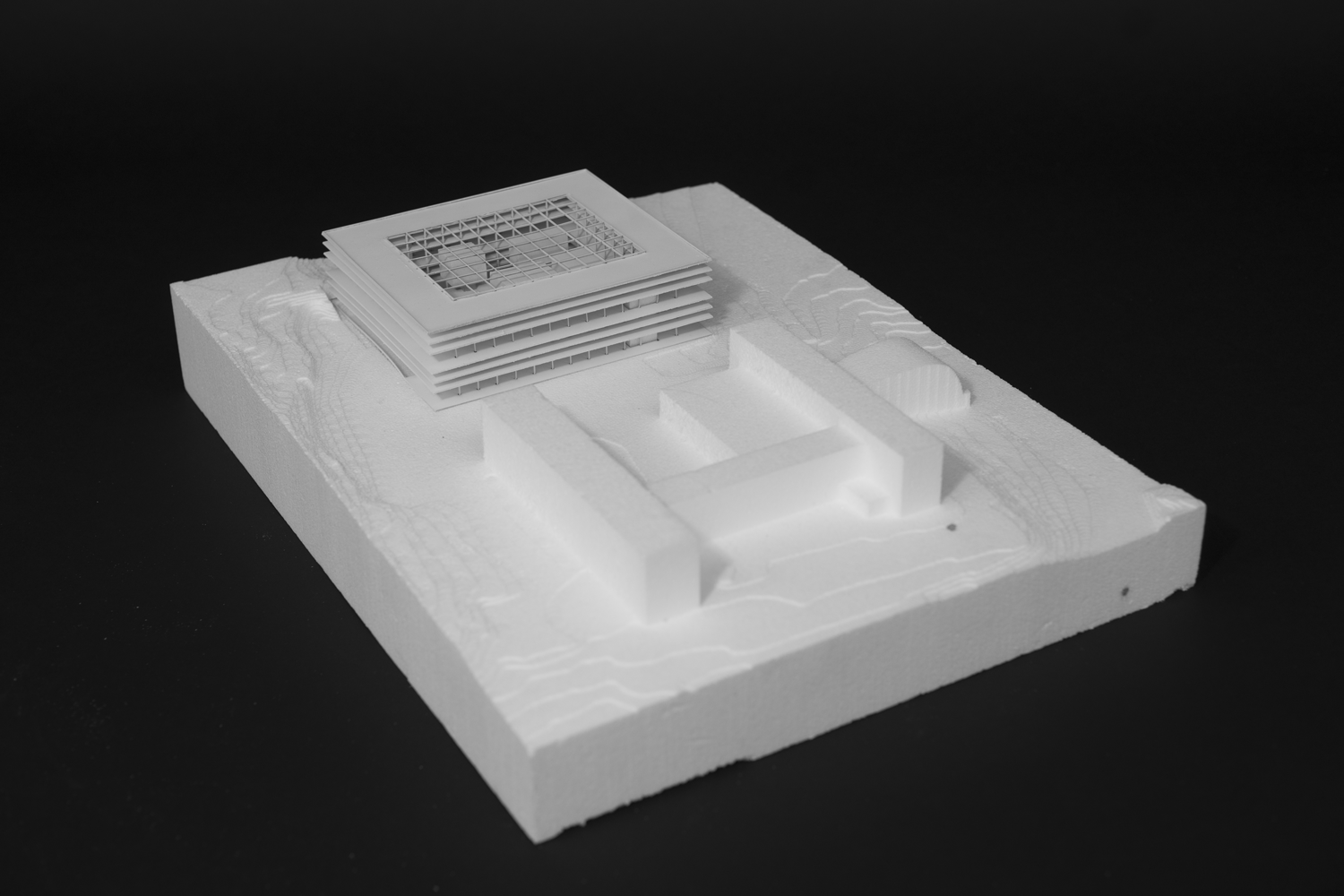 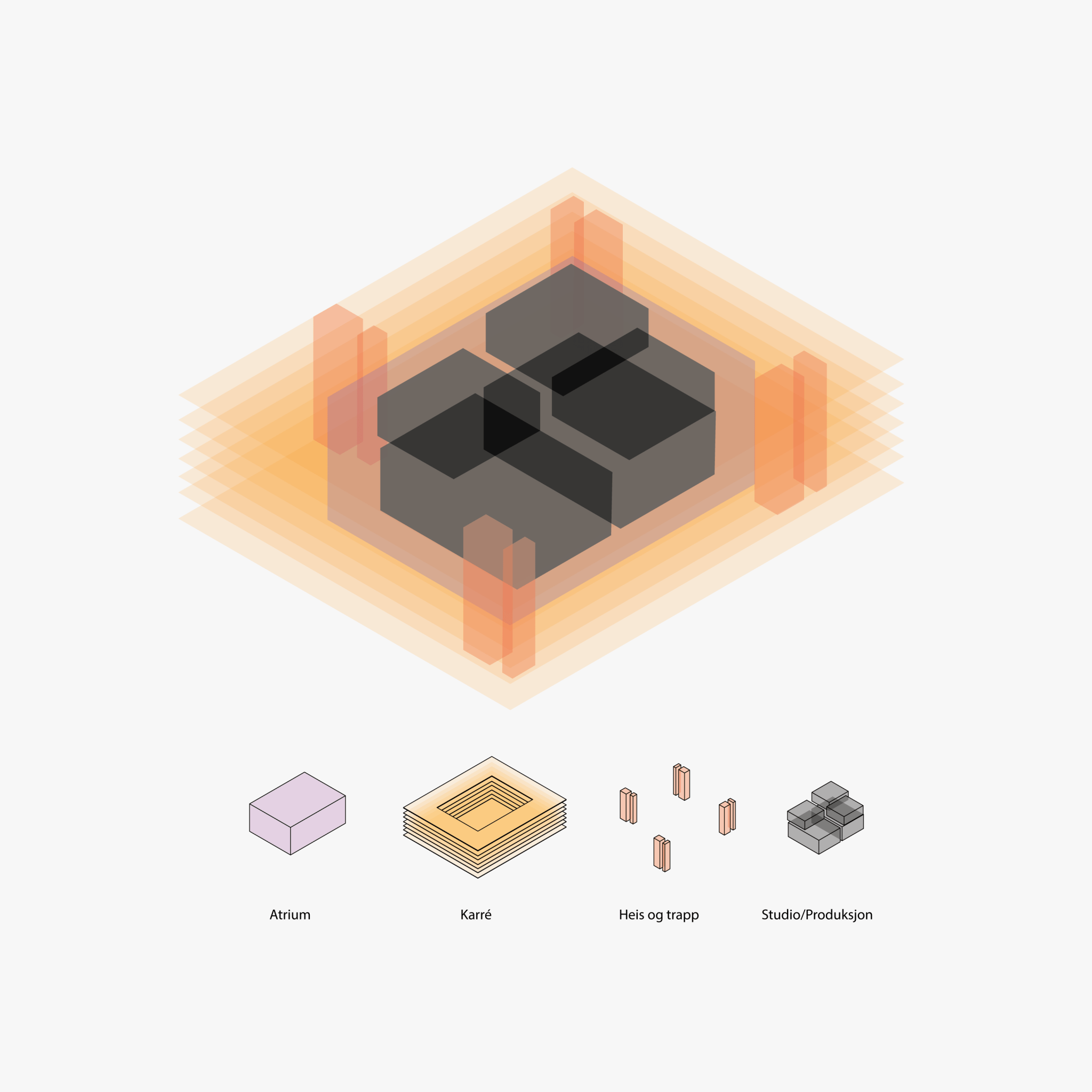 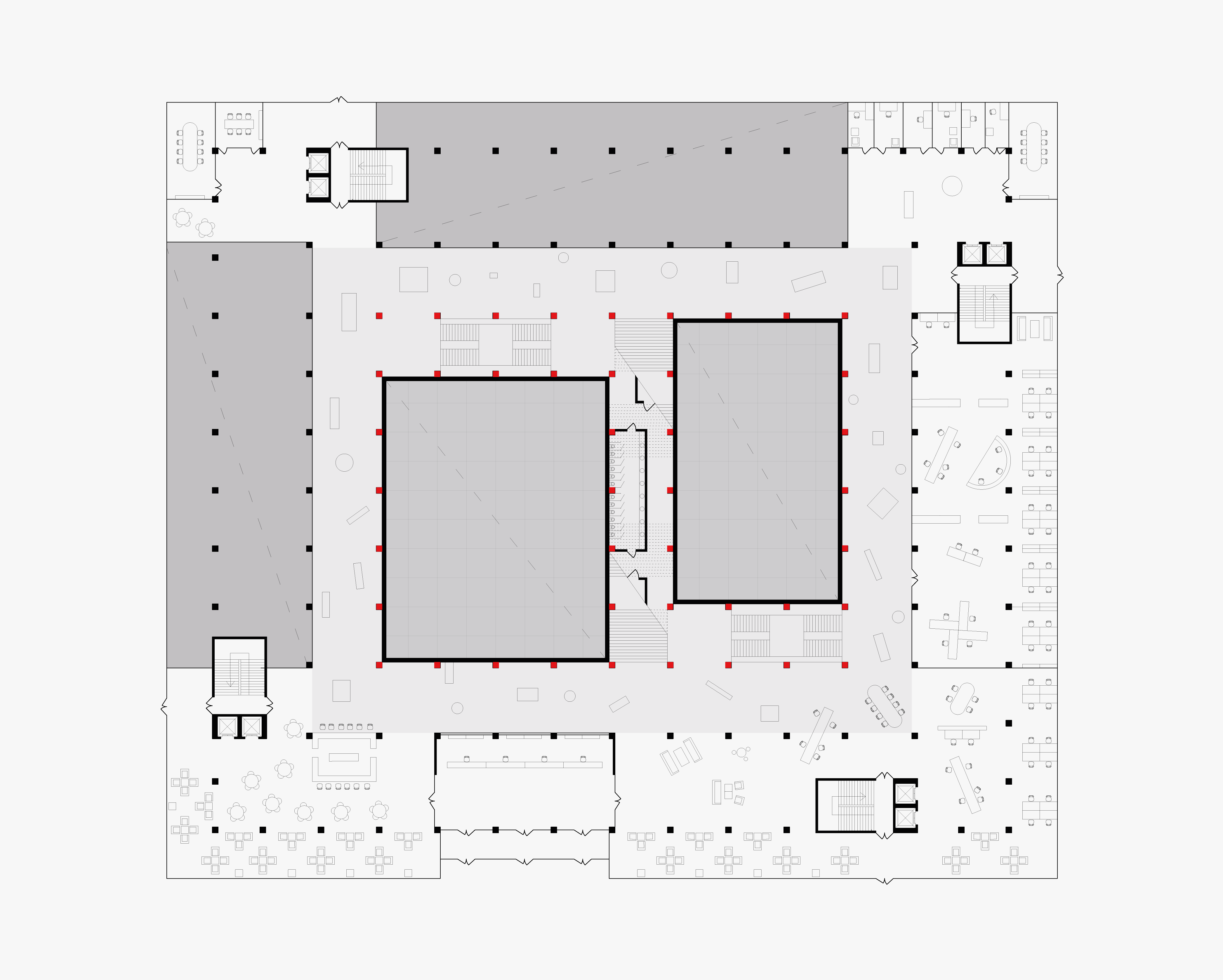 I see the studios as one of the most important and exciting rooms that NRK has, so I want to centralize this part of the production at NRK. By placing all studios, TV and radio in a large atrium, these rooms will be highlighted. While these rooms are emphasized and centralized, it also raises awareness of where one is in the building. And this becomes a form of orientation for the user of the building.

At the same time, I also think there may be an interesting contrast between the bright room and the dark studios. Where you are above, below, between, around and in the productions. This movement above, below, between and around, is where the main circulation is placed. The TV studios are blackboxes. Different studios should be available from different levels in the “carré”, and editorials are placed in close connection with any studio. As an example, the news editor is in close proximity to a news studio.

The red columns in the drawings are the columns in the atrium. These are placed here as a constructive and architectural element. They maintain the roof structure and parts of the stack of studios. The plan should offer openness and variety that makes it easy to orientate and between all plans. In each plan there is a hierarchy. 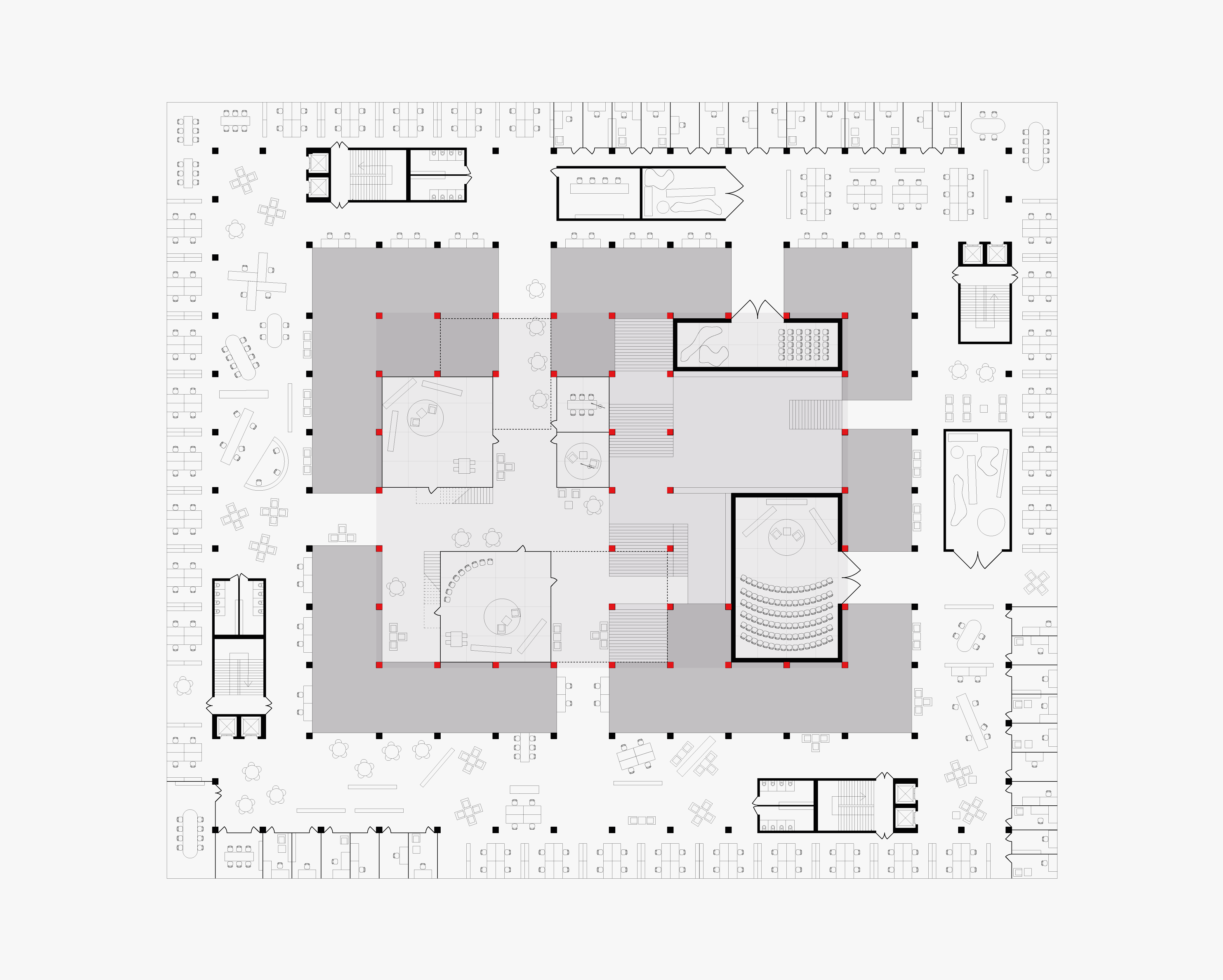 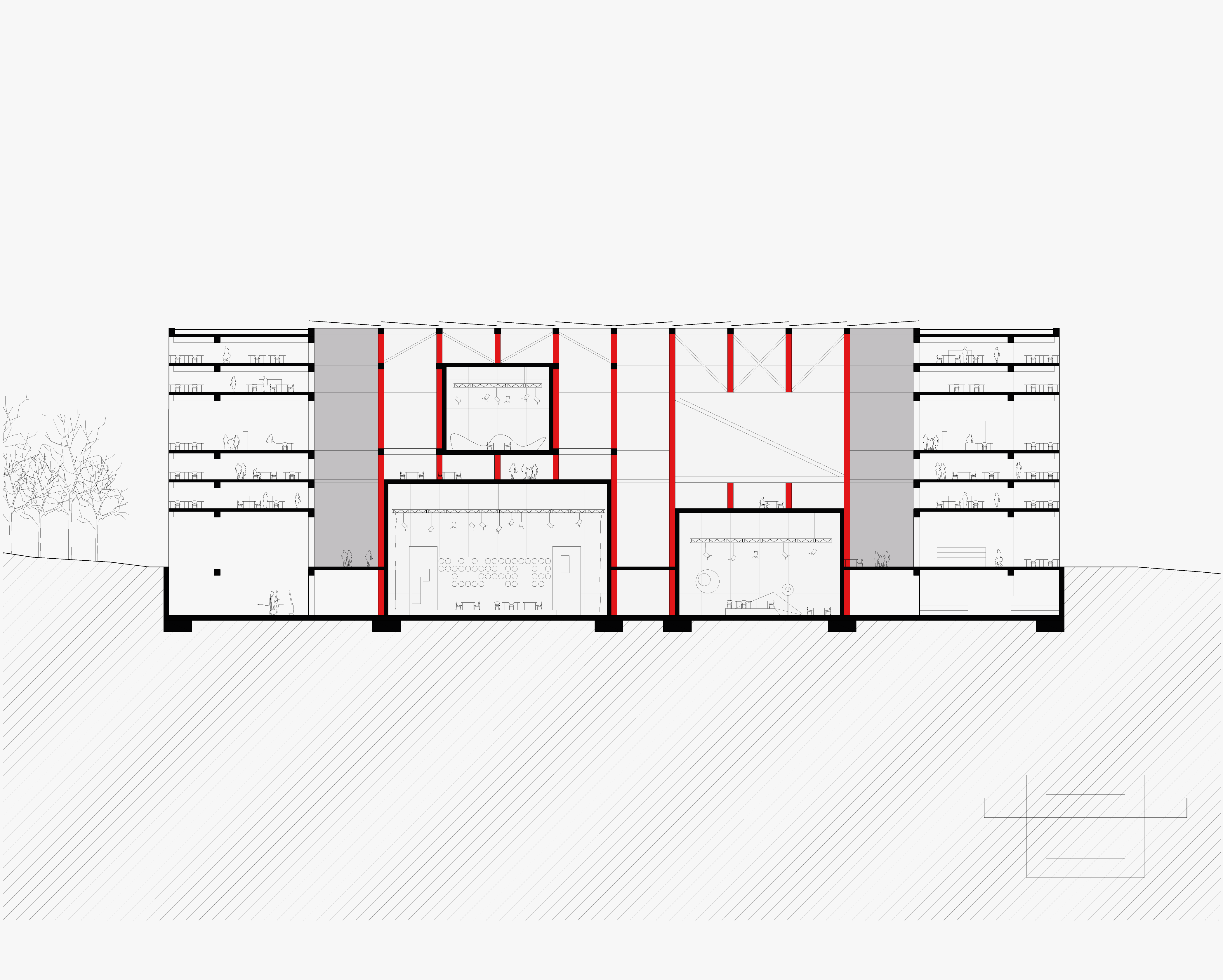 Between the productions is a project that centralizes studio production in plan and section. The project is trying to investigate whether it is possible to create new spatial experiences in the media houses of the future. I have focused on the atrium and how it can create an interesting and stimulating environment for those who work with media.